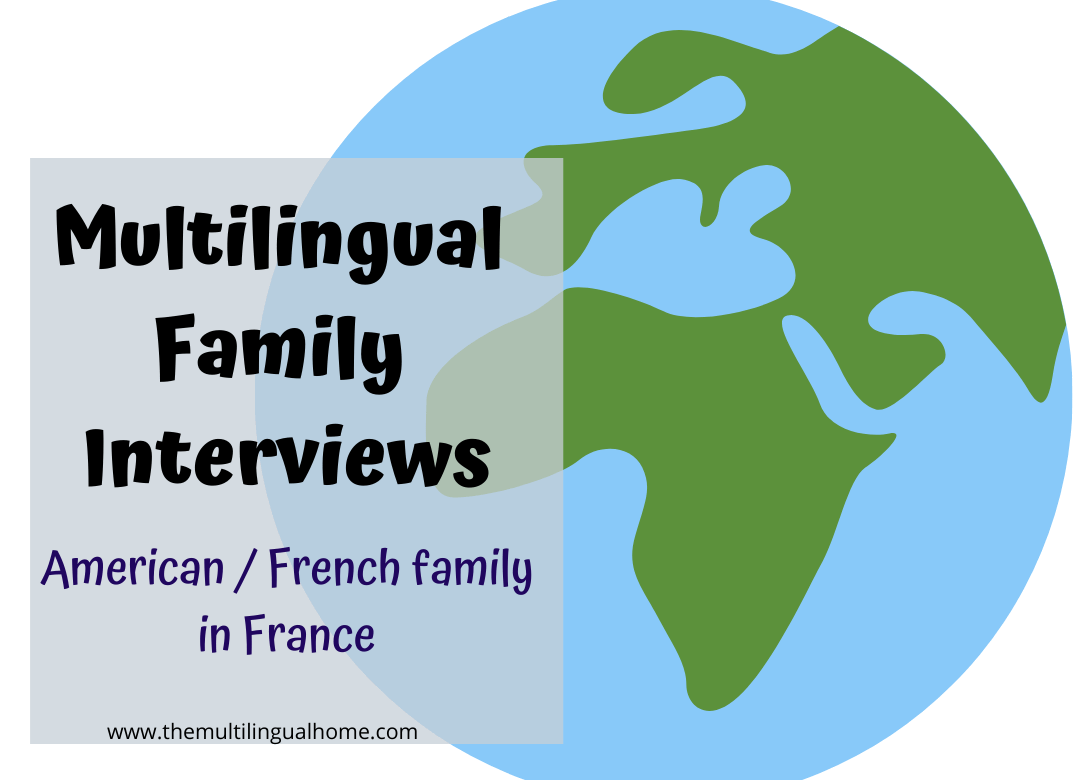 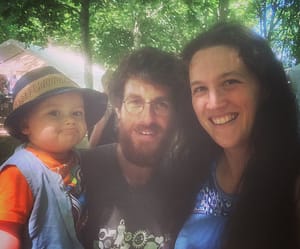 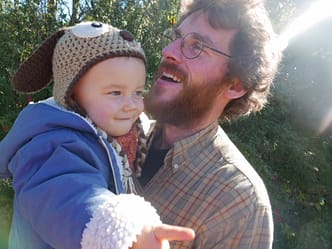 My name is Ashley and I live in the Brittany region of France with my husband, Fañch (Fañch is pronounced with a nasal n, so it sounds a bit like Fawnch), and our son Lewis, who is 18 months old. We live and work on Fañch’s family’s farm with his parents and brother. We all live on the farm as well, or within walking distance, so we all see each other daily. There are some days that Lewis spends just as much time with his grandparents or aunt and uncle and cousins, as he does with us!

I speak English with Lewis and Fañch speaks French with him. Sometimes Fañch speaks a little English as well, or reads bedtime stories that are in English. Lewis also hears some Breton from his aunt and uncle, who speak it daily with their children. 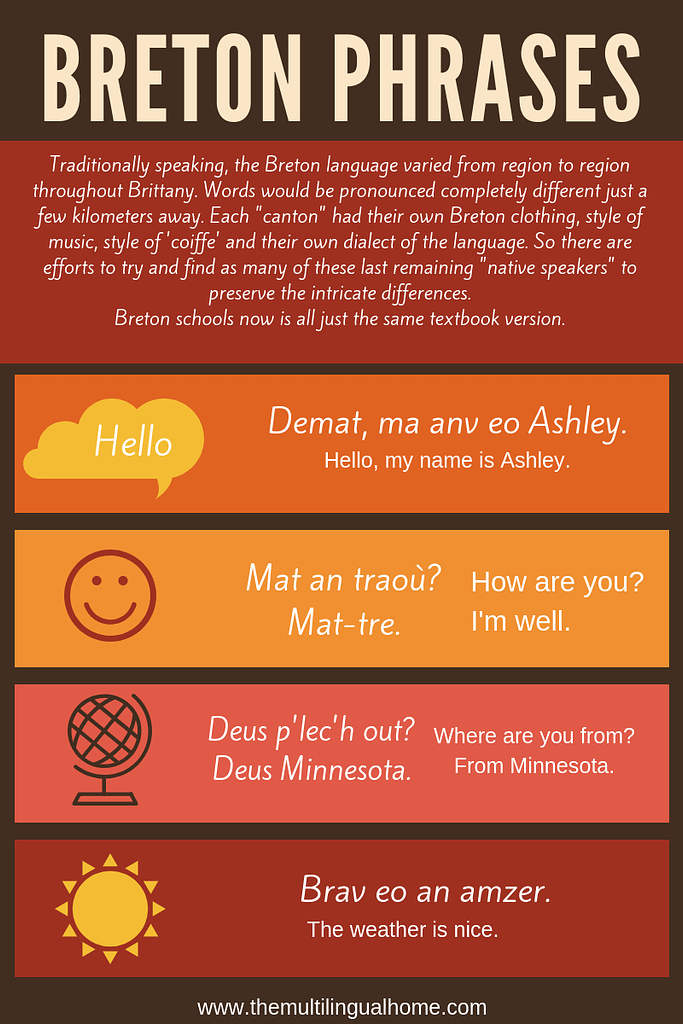 English and French are the languages we speak on a daily basis for now. With some Breton sprinkled in here and there from other family members and friends.

For the moment we are not actively teaching him the languages, just speaking with him and letting him pick things up on his own pace!

We are thinking we may homeschool for the first couple of years, simply because we aren’t comfortable with him starting school as early as most people seem to here (we know folks that sent their kids to school full time practically as soon as the child was 2 years old). As far as how we plan on incorporating languages, we would have a mixture of games, books, and activities in the three languages. Some of that, like the books for example, are already a part of our daily rhythm. We make sure to have some in each of the three languages.

Once he gets a little older he will most likely attend the Breton immersion school here, Diwan.

So far we haven’t had too many challenges, mostly because he is just getting to the age where he is starting to talk more and more. The main challenge is simply trying to figure out if the word he is trying to say is French or English! Otherwise I think the main challenge for my husband and I is getting in the habit of me speaking English to him so that he learns as well. Because I speak French with my husband and in-laws, our son hears me speak quite a bit of French in addition to the English I speak to him. I want to get in the habit of speaking English to my husband and him responding in French (or English if he’d like!).

I did think of one other challenge that has been on my mind lately. We would like to homeschool Lewis for the first couple of years, neither of us love the idea of sending him to full-day school right away. But at the same time we will probably choose Diwan, the Breton immersion school when it does come time for him to go to school. I am worried that if we wait and start him when he is 6, for example, he will have a difficult time catching up in Breton because the rest of the kids will have already done 2 or 3 years of Breton immersion school. I am worried about it being too stressful for him to start school, meet new people, and have it all be happening in a new language. We have some time to figure it out but maybe we will have to send him to school earlier than we’d like so that he isn’t too lost? Or maybe we will have to skip the Diwan schools even though we both like the thought of him learning Breton (and their teaching style and pedagogy appeals to us more).

One of the things we have been working on lately is showing our son pictures of his family in the U.S. so that when we go over there this winter he will be able to call them by their names (which they would love). So far so good, when his American grandma calls on Skype he says her name then grabs the phone, walking around with it and saying ‘Hello’ over and over.

This summer we hosted several WWOOFers from the U.S. here at the farm. This gave Lewis the chance to hear me speaking English on a daily basis with other people. They also played with him and spoke to him throughout their stays. We have some friends in the area that are also anglophone so we try to get together every once in a while so that the kids can play together. We listen to a lot of music as well. So far he has only traveled to the U.S. once but we will be spending five weeks there this winter!

One thing I have to remind myself is to not stress about it too much and to just let him learn at his own pace. A lot of my family members back home will ask constantly if I speak English with him, they worry about not being able to communicate with him, being left out, etc. These are also concerns I have but I try not to let them make me anxious and just focus on raising our son and having faith that he will become fluent in both languages.

Name up to 3 ressources you find useful for your family.

I haven’t started to seek out too many resources yet just because he is still young and we haven’t started actively teaching him yet. When he starts to learn Breton we will take advantage of the many resources in the area geared towards preserving this language. I know there are family hikes, plays, movies, story time, and many more activities organized that all happen in Breton.

I would recommend simply learning the language that you are most passionate about. Learning another language (as an adult anyways) can be at times exhausting and stressful. If someone wants to learn another language it is much more enjoyable if it is one that intrigues them! 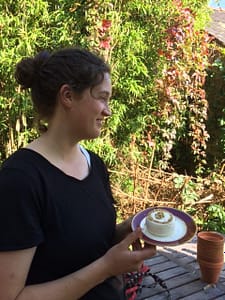 Ashley is originally from the U.S., having grown up and gone to school in the Midwest. She moved to France after graduation and now lives with her husband and their son on a farm in the Breton countryside. She currently works part time on the farm and is in the process of learning how to make cheese. She also loves to read and always keeps an eye out for an English book or two at the local flea markets. When she can, she writes about life on the farm and living abroad.

Some of Ashley’s cheeses : 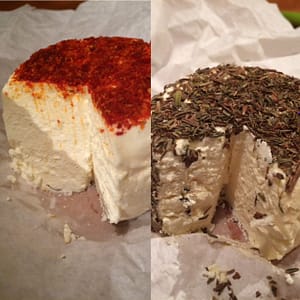 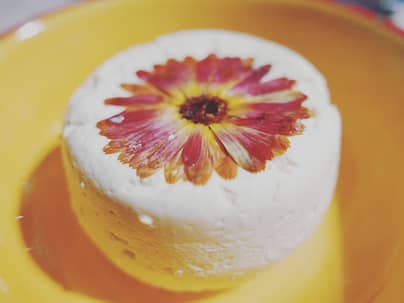 This is a unique interview. I have never heard about Breton language before, i have just googled it, and found out that it is a local language in French that has a very old root. And i learned that Breton is classified as “severely endangered” by the UNESCO Atlas of the World’s Languages in Danger. It is wonderful that their son can hear the language daily from grandparents. Thanks for sharing!