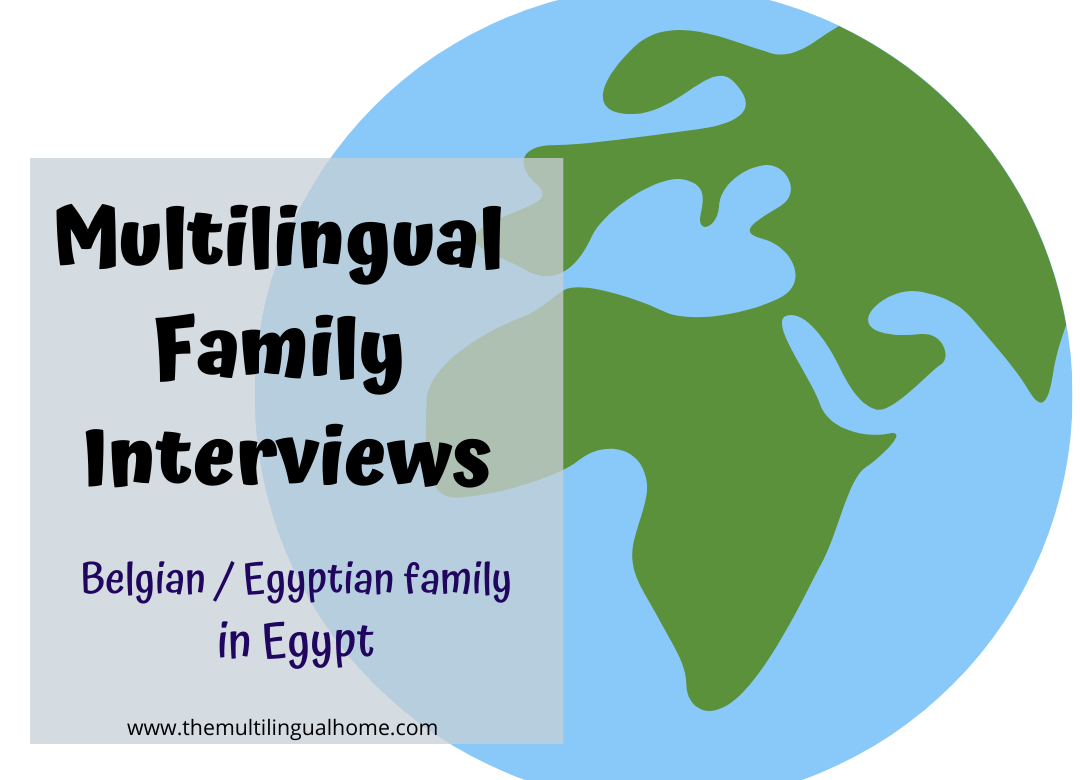 I was born and raised in Belgium, but a few years into our marriage, my husband and I decided to move abroad. We have lived in Qatar and the USA and we have been living in Egypt now for the past 3 years.

My native language is Flemish, it’s a Dutch dialect spoken in the northern part of Belgium. I also speak English, French and a little bit of Egyptian Arabic.
I am a total history nerd and actually became a Latin teacher! As a teen I was very interested in studying in ancient languages and Latin was an easy choice. I also touched on Ancient Greek and Ancient Egyptian (Hieroglyphics) during my studies. Unfortunately I can’t really speak any of these.

On a daily basis I speak 3 languages: Flemish/Dutch with my children, English with my husband and a little Egyptian Arabic when I am running errands or when I pick up on conversation between my husband and the kids.

I don’t actively ‘teach’ any of these languages to my children, but our children are learning these 3 languages naturally in our home where we read books, have conversations, … in all 3 languages.

No, we do not homeschool.

Yes, our oldest, Adam, attends a bilingual school in English and Arabic.

Adam did struggle with the languages when he first started school here in Cairo. Although he had been exposed to Arabic and English at home since birth, the language he spoke most often was mine (Flemish/Dutch) and it was the language he was best able to express himself in. Adjusting to speaking only Arabic and English at school definitely took time. At first he would speak only Arabic. It took several months before he felt comfortable enough to speak English. But now I often hear him talk in English to himself at home as well when he’s deep in his own world of play.

Tell us about one or two of your successes.

Although my children never lived in Belgium, they do speak Flemish/Dutch rather well. It is not a language they can use here in Egypt, but I am still glad I stuck to speaking my own language to my children. This way I was able to pass on some of my culture and history to them. Despite my fluency in English, it just felt weird to speak anything other than ‘my’ language to my children. And it’s kind of cool to be able to have conversations in a language very few people understand here.

Children soak up languages like sponges when they are small and if you want your children to be able to speak more than one language the most important thing is to expose them to that language in a natural setting from birth: if both parents speak a different language, let each parent stick to their language in talking with the children and let them do so consistently. Don’t rely too much on screens or books or a traditional way of teaching languages, but surround your children with actual people who speak that different language: family members, teachers, other children at nursery or school.
Trust that your children will speak a language when they are ready to do so and let them speak in the language(s) they feel comfortable with.
And trust that, yes, children can learn 2, 3 or even more languages naturally. Our oldest, Adam, at 4 years old speaks and understands Flemish/Dutch, Arabic and English and is well on his way to become fluently trilingual. (Keep in mind that he only started saying his first words around his second birthday!)

Books. On whatever subject your children find interesting! Adam has been very much into animals and so we have books about animals in all 3 languages.

I think this depends greatly on where someone is living and what languages they are exposed to/hold value for them. I would not necessarily recommend a specific language, but I would definitely recommend learning another language!

I am Anke (or Ayah), former teacher and mother to 3 wonderful human beings. I became a muslim over 10 years ago and Islam inspires me to be a better human being. I am passionate about education and respectful parenting and the philosophies of Montessori and RIE inspire me to be a better parent. I share about all that and more on Instagram @montessorifimasr.

Book Review : Allah Made Us All Different by Rabia Gelgi