Moon Activities for Pre-K and K 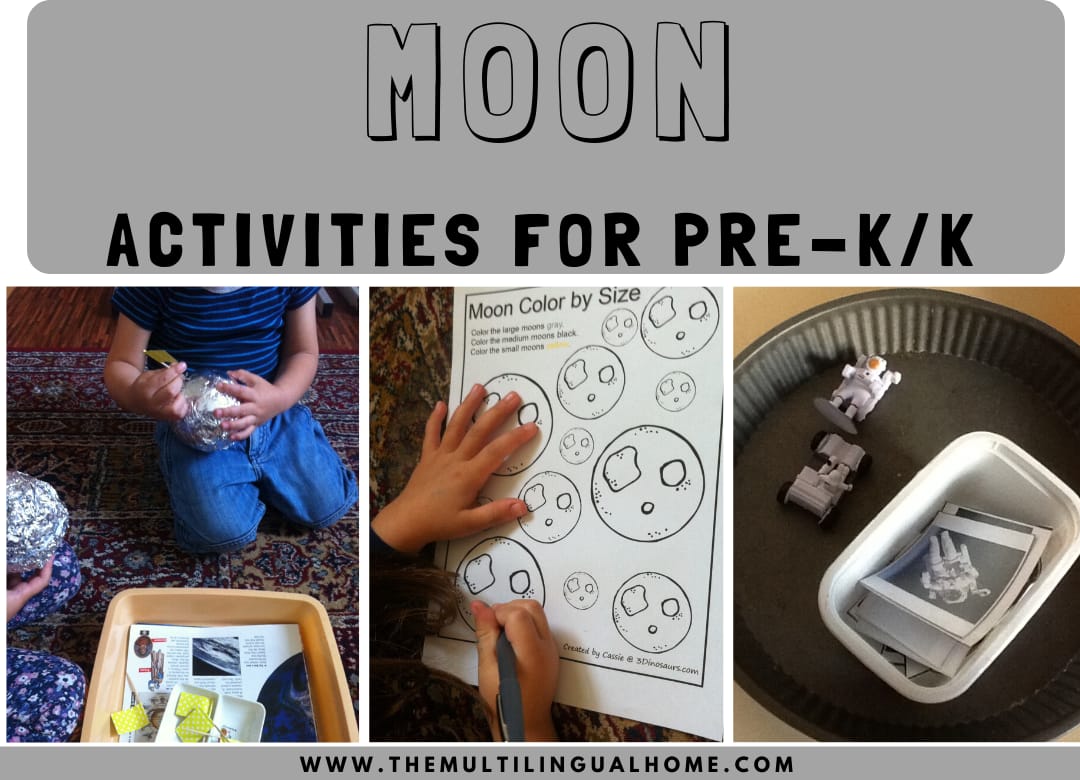 Today marks the 50th anniversary of Apollo 11 landing on the moon and the astronauts walking around on the moon.

This historical moment of landing on the moon happened on July 20, 1969. Neil Armstrong became the first person to step on the moon about six hours after landing alongside his colleagues of Buzz Aldrin and Michael Collins.

Every year, since I started school with Miss F, we always had a space unit. One of the themes we always cover is the moon, astronauts and exploring space. This theme included lot of Montessori inspired activities found on various blogs around the internet.

We read books that were both in French and English about the moon and the astronaut’s jobs, Look inside space by Usborne and La Lune by Nathan. We read about exploring the moon and the Apollo 11 landing from a magazine for kids that I have forgotten the name.

We tried to make our own moon art by cutting strip of paper and gluing them on to a circle shaped like the moon.

We made moon rocks out of crumbled up aluminum foil. We made up counting and size sorting games.

Landing on the moon

I came across this fun activity on the blog, The Kavanaugh Report. All you need is a styrofoam ball that you cover with tinfoil and little flags. The child then puts their flag in one side hole of the moon, just like the astronauts did when they landed on the moon. This ended up being a favorite activity of my kids.

Walking around on the moon

After putting our flags on the moon, we got out the rest of our astronaut figurines and we made some cloud dough. My kids pretended like we were astronauts walking on the moon like the ones we saw in this video. As the kids were playing, I read about moon craters and how the different kinds were made on the surface. We took a marble and tried creating different kinds of craters.

This post contains affiliate links that are my recommendations for products that you might find useful. They do not cost you anything, but I am given a small commission for your purchase of any of these items.

I find it so interesting that hands-on and Montessori inspired activities have been created based off events that happened in history. I also have made a Bilingual Moon Tracking printable in French and English that can be found in my Teacher Pay Teachers Store, The Multilingual Homeschool!