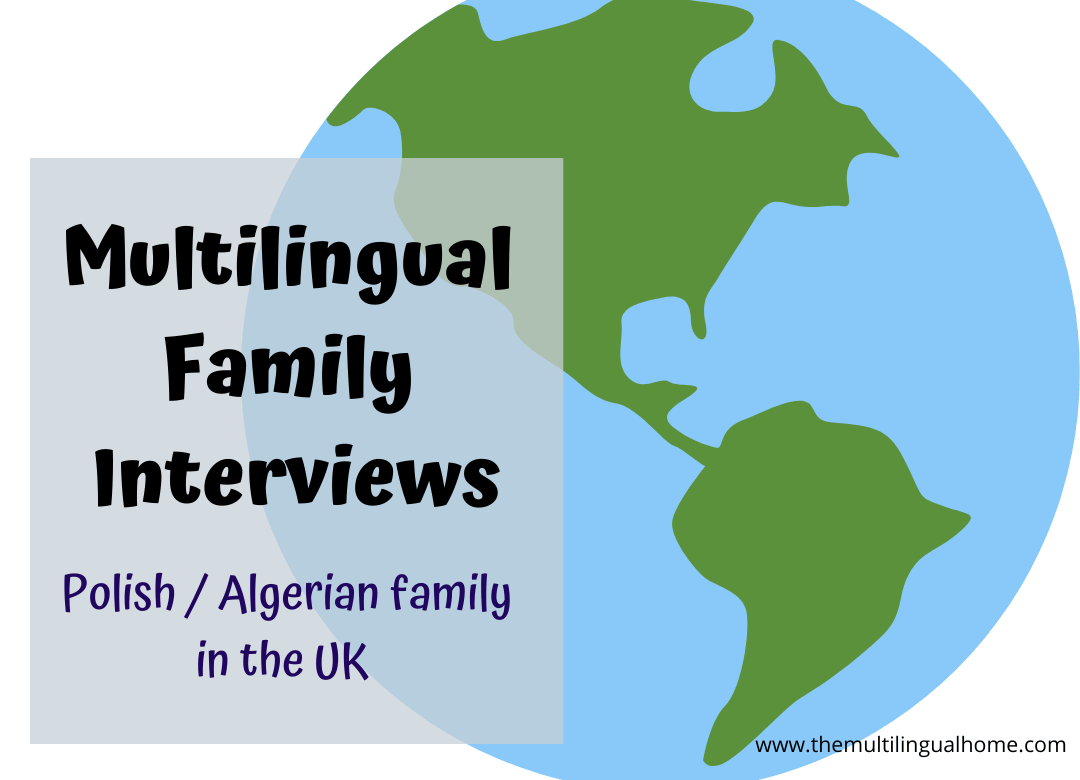 Assalamu alaikom wa rahmatullahi wa barakatuhu. My name is Aga (or Kawther since I’ve embraced Islam in 2012) and I’m a Polish revert living with my family in the United Kingdom. My husband, Noureddine, is of Algerian origin and we’ve got two kids alhamdoulillah. Hajar is nearly 4 and Adam is just 4 months.

We do communicate in English mostly, but Arabic, Dziri (algerian dialect), French and Polish are also present. I also know German, Italian and a sign language, but these are not used in our home at the moment.

English is the main language and as long as we are living here, this is the language that we want to communicate in. But if we are ever going to move abroad, this will certainly change. We also speak Arabic, Algerian, a little bit of French and very little of Polish, so I would say there are 5 languages used daily at the moment.

I taught my daughter English and I am happy with how it turned out mashallah, as she is like a native, and as I’m being an immigrant here just for 7 years, this seems like a big achievement. I now let the school do its job now so hopefully all the new vocabulary will come from there so I can shift my focus to teaching her other languages now. My son is still too small, but I am going to follow the same pattern. By starting with English just to have the main language to communicate and then when he starts to understand some bits, I will build up the vocabulary in other languages.

No, I don’t homeschool, however I was considering that for a while. But decided that as a non-native English speaker, I don’t want to take the opportunity of becoming totally socially assimilated away from my kids. They were born here and I want them to feel no different than other kids. I want them to be confident that they speak as a native speaker would speak, mostly to avoid people questioning them “where are you originally from”, as they question me on daily basis.

If you do not homeschool, do your children attend a bilingual or multi-language school ?

No, they just attend a regular school and they are going to attend the weekend Arabic school from the age of 5-6.

Teaching them Arabic, French and Algerian are the hardest for me, as I don’t know them well myself. So, I fear teaching them wrong, but trying my best inshallah.

Tell us about one or two of your successes.

My best success was when my daughter attended the nursery for the first time. I was told that she speaks like an adult in terms of vocabulary and uses a wide spectrum of complicated sentences for her age. I consider this my small victory.

What is some advice you would like to offer to other  multilingual  families?

Don’t try to teach them all at once, I would say, as it didn’t work for us. It may get mixed and we don’t want the kids to mix the languages within one sentence. The key is to make them understand that each language sounds different and being able to recognize what language is being spoken without even knowing the words I’m using.

RELATED POSTS //  Connecting with Multilingual Families around the World

My personal favourite is Italian. It has super simple grammar, easy to follow rules and oh my God, it sounds so lovely! And hey..Italians invented pizza!

Aga/Kawther is a mum of two, juggling everyday life with two kids under four years old and a husband. She is a homemaker making sure everything works as it should. You can follow her on Instagram @umm.joujou if you’d like to.

How to Read to a baby or toddler ?